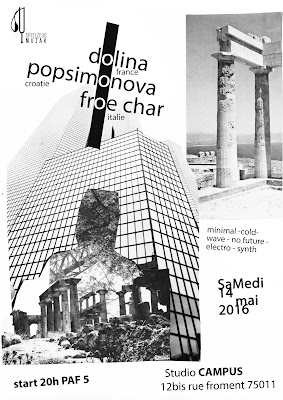 LIVE SET >>>> @ STUDIO CAMPUS
11 Bis Rue Froment 75011
PAF 5E - START 20H
https://www.facebook.com/events/207098066342950/
ϟ POPSIMONOVA (future techno / Croatie)https://soundcloud.com/popsimonovaϟ DOLINA (Cold / synth wave - France/Belgique)dolina.spielzeugmuzak.netϟ FROE CHAR (obscurelectro - expérimental/ Fr-Italie)
https://soundcloud.com/froechar■ POPSIMONOVACroatian producer, composer and songwriter active in the music scene since 2006, as one of founding members of the electro band Dekolaz. In the year 2008, after the break up of Dekolaz, Popsimonova started her solo project . With releases on Enfant Terrible, Romance Moderne , Gooiland Elektro ( first solo 12") , LP on J.A.M. Traxx (with Zarkoff)and first solo LP on Electronic Emergencies label 2015.■ DOLINADolina are the spectral voice of Najah, and the crying machine of Dash. After a few years of semi - silence , in 2015 , the band returns with a new 7 ' ' made on the french label Spielzeug Muzak . Between old and new tracks covering 10 years of existence, the Dolina promise a live dark- electro, filled with melodies that deviate from synth -pop to the most controversial of industrial ballads .■ FROE CHARA constant dispersion of sounds. flux of rhythms,hideout for noises - revealing of voices.
Publié par Disko Kaos à 12:56 Aucun commentaire: 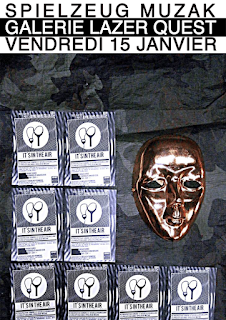 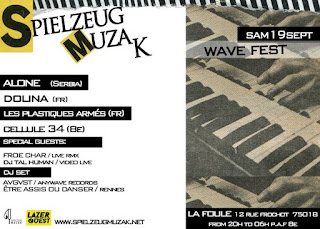 
Alone is a project from Belgrade run by Nikola Vitković (also member of Konvoj Bonton Bajkera, Alone in heaven..). Hiding away from public sight, Alone spends his years in his mono utopia, reinventing the alternative history of industrial and melancholic synth pop. His melody is gentle but dark, his beats are slow but hard, his synthesizer is foggy but sharp. Over last 20 years, he has released 6 albums on N.A.U.K., Treue um Treue and Cold trinity. Once again in France, Alone will present his new LP "Coast" freshly released on Spielzeug Muzak.
http://solair.eunet.rs/~scnet.phantom/
France-Belgium!
---------------------------
DOLINA
/cold-electro-wave/


After a million years of retirement and many implications in other projects (:codes, Chambre froide, Ame de Boue, Illustration sonore..), Dolina is finally back on stage! Expect a mixing of old and new songs covering the 8 years of existance of the band. From dark electro hymns, to deviant synth-pop tunes and to surrealist and mysterious synth ballads, always haunted by the spectral voice of Najah.
dolina.spielzeugmuzak.net


Dirty guitar + dirty synths.. From a few years, this one man band delivers sporadically some marvellous minimal post-punk songs of his own. Finally Spielzeug Muzak just released a tape selection of those lost tracks! Raw and emotional compositions that come back in your head on grey days.. Let's take an other drink!


Incredibly good news for all the french new wavers!! A new minimal synth duo has risen from the ashes of Merci la nuit and Passion Armée!
Hailing from Saint Etienne, Merci la nuit has been a real breath of wind in the landscape of the re-emerging french minimal wave.. Far from the stylised hype, it developped its own contemporary style reconnecting with the spirit of old bands like Polyphonic size, No unauthorized etc..
In its short lifetime, Passion armée has been very active in the post punk and anarcho scene, playing a lot of concerts and delivering a bunch of solid cold wave hymns with a strong critical message.
We didn't heard a lot of Les Plastiques armés and we are very excited to discover this very new project with members of those two projects that marked us..
https://spielzeugmuzak.bandcamp.com/track/a2-les-plastiques-arm-s-h-g-monie

Specially for this special event, the italian / Parisian Froe Char will perform an electronic live + dj set revisting the 5 years of Spielzeug Muzak in an analogic post-technoid apocalypse.. Surprise!

Interactive vjing by the president of the New future himself. 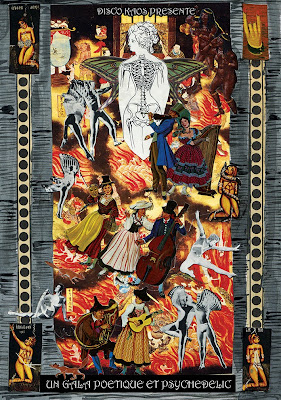 Following on in visionary mutopia, the 1997EV machinery is bound to another voyage transmission ... join the lysergic circus and let yourself be swallowed into its vortex flangerstone ...  pills are silent, seasons fade onto unusual sonic nights in stereo making out with distorted electricity! No inner walls or new push buttons.
It is highly recommended that a Sun.God.Opium filter be employed before proceeding any further ...

"The complex compositions tell us of faraway places, conjuring vivid pictures of south American-landscapes, full of Bohemian romanticism and Mediterranean flair. Dreamy, lazily ballads alternate with somber pieces like funeral marches in the heat and dust of a summer evening, revealing sudden pangs of unease and anguish behind the flowing southern nonchalance." (from TuT/RuR)
https://soundcloud.com/niedowierzanie

Since 1996 Tzii, music composer and filmmaker, spreads his magickal frequencies all over the world through touring from Eastern and Western Europe to Australia, passing by USA, Canada, Japan and Africa, where he played hundreds of shows..… A mountain of multiple figures...
http://www.tzii.tk/